What a month July has been!

Like many, I normally peruse the Pirate discord several times a day but I don’t keep track of progress. Writing this update has really shown me how much the Pirate armada accomplishes in a month and the breadth of projects going on in the horizon!!

Thanks to Pirate Queen Jane @radix42, now you can with the Pirate Chest! Built on an arm v8, the Pirate Chest comes complete with a the Seven Seas wallet installed, just plug it in and you’re ready to go in a few clicks!

To celebrate this milestone, Captain Fishyguts will be donating a couple of Pirate Chest giveaways! Keep an eye out on discord and twitter!

Thanks to Pirate Queen Jane @Radix42, this is the latest newest official wallet for Pirate and comes pre-installed in Pirate Chest! In addition to the expected private transactions, the Seven Seas wallet also has new privacy features and tools that facilitate merchant payments:

Along with Verus’s Agama multicoin wallet and ComputerGenie’s PirateOcean, Radix42’s Seven Seas Wallet offers new features that complements the suite of wallet options for every user and every purpose.

All wallets of Komodo Ecosystem Coins are required to update to the latest versions:

Progress is being made as we sail closer towards a solution for mobile lite wallets. nSPV solved one of three essential components needed for mobile zaddresses!

Did you know? Pirate Chain has a new Telegram Announcements Channel! Run by Stefjazar, this is a read-only channel that will keep Pirates updated of all latest and noteworthy news about ARRR! Subscribe now and stay informed of the latest Pirate Chain news: https://t.me/piratechainAnnouncements

Praise from Monero and ZCash

There has been several public acknowledgements of Pirate Chain’s Privacy! And not just from anyone, the accolades came from both Monero and ZCash teams! 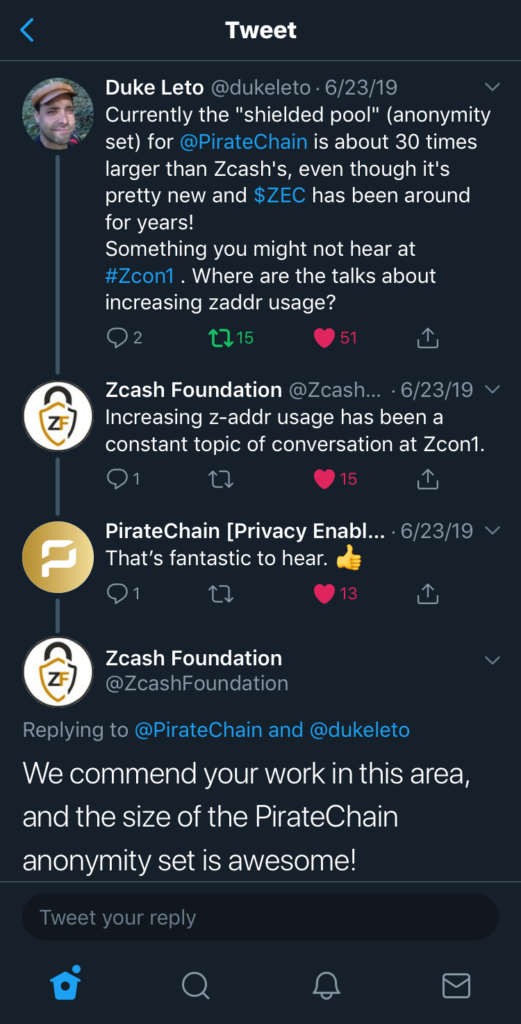 “The nod from fellow privacy tech projects is good. The way those nods were expressed are not offending at least.

They are indeed acknowledging that there is another well competitive player in the marketing in privacy space who is worth mentioning in their own tech talks.

They all must have the first mover benefit in starting the privacy coin, but I see Pirate has the first mover advantage being the 99.99% anonymous transaction blockchain from the very start.

No other privacy project so far can beat it.”

Pirate has a new Youtube Channel! Thanks to CryptoFist for setting it up! Subscribe and hit that notification bell to get updates whenever new videos are uploaded!

Traditionally, like all cryptocurrency mining pools, all mining addresses are publicly displayed showing their cumulative mining rewards and mining statistics. In the continued effort to optimize privacy, several Pirate mining pools have switched to true “private mining”, i.e. mining addresses are not publicly displayed. Now with Private Mining, a miner needs to enter their private address to view their mining activity.

Share some rum with the following pools that have adopted Private Mining!

Pirate Chain Notary Nodes are ripping it! CaptLynch has been tirelessly optimizing the NNs:

“I’ve spent a lot of time tinkering, tuning, testing until I found what works”

According to CaptLynch, as of July 31st:

ARRRmada.com has adopted the CryptoCurrencyCheckout (CCC) payment gateway. CCC offers 1-click payments for desktop wallets, scannable QR codes for mobile devices, and manual input so you can even be paid directly from Exchanges. Thanks to @!Ratstang CryptocurrencyCheckout

Pirates! Spread the word to your friends and families to use CCC on their online stores and start accepting ARRR!

Cryptofist: Pirates Week festival is an annual festival about all things Pirate held in November in the Cayman Islands.  This being the largest of Pirate festivals has an attendance of over 35,000 people from all over the world.

This is a bucket list event for many people and a golden opportunity to let Pirate Chain shine in many different ways! We aim to spread the use of crypto while educating the festival goers about Pirate through interaction, info-rich literature, merchandise and sponsorship.

The Cayman Islands are a crypto friendly locale (non-black listed, funds and businesses being started there.) On some non-festival days we will be networking with local businesses to help drive adoption. There will be several other possible opportunities that we can tie into this as well (creating new content, building local raport).

We are currently fundraising to make this happen in a capacity as large as possible  and in consideration of the exposure this will present for us, it is by no means a small step forward. Community members have donated funds to cover expenses and sponsorship, every bit more increases our capabilities. Please consider donating to the mission to the below addresses or join us in #pirate-festival in discord to learn more https://discord.gg/xYd2wCV

Pirate is stepping up and promoting education about personal privacy. Thanks to @Draeth for the first set of revolutionary “Take Back Your Privacy” photos!

For starters, we are looking for some help with privacy poster ideas, make your pitch here: https://discord.gg/jWf3UUz

Captain Fishyguts will be working with a Public Television production team about crypto, privacy and Pirate Chain! Lookout for next updates and air date!

Unclaimed ARRR from Agama hack: In May, the Agama wallet experienced a hack potentially exposing private keys of Agama wallet users. Swift action by the team led quick discovery of the vulnerability. Using an ingenious strategy, the Komodo and Pirate developers used the loophole that the hacker found and outhacked the hacker! KMDs and ARRRs were moved to safe locations. Majority of moved funds have been returned to their owners, there are currently ~70k ARRR still to claim. So, contact @mrlynch on discord to claim your funds if you discover you’re still running the old Agama wallet and your ARRR is missing.

This is a new section to the monthly updates! Each month we will feature an ally merchant from ARRRmada.com. For our inaugural merchant-of-the-month, we are happy to showcase Physical Crypto Coins, a business started by our very own dread pirate Draeth!

The Origin of Physical Crypto Coins

It all began in early 2019 during a discussion about marketing strategies, in the Pirate Chain discord channel. Lots of ideas were being thrown about when I chimed in with the pitch to make physical Pirate commemorative coins. I have been collecting memorabilia coins for Bitcoin, Litecoin and Ethereum. Naturally, I thought it would be cool to get one made for Pirate. The idea was very well received by the community, so much that the captain of Pirate Chain, Fishyguts, suggested that I look into making one for the project.

The Pirate community was very engaged, offering ideas and suggestions until the best design was unanimously agreed upon. The coin took about two weeks to mint, and the first ever commemorative Pirate coin debuted to high praise and exclamations of excitement from the community. The project leader for Komodo, JL777 was so impressed with the Pirate coin that he immediately commissioned a design for the Komodo project.

I realized then that I have stumbled onto a niche market, physical coins for projects that are not in the top 10 market cap. I named my store Physical Crypto Coins.

Through successful marketing (and huge thanks to Fishyguts), I have created coins for Pirate, Komodo, Verus, Burst, Verge and Komodore64. And, the most successful coin is Pirate, with 3 versions commissioned so far: the Original (retired), Version 2 (newly released), and a Special Edition .999 Silver coin (sold out!). Designs for Hempcoin, Electroneum and HUSH are recently available. Growerscoin, LumberScout, AIO Casino and the new version of the Komodo coin are in the works.

The Future of Physical Crypto Coins

The coming months promise to be very exciting for Physical Crypto Coins. Discussions with several teams are currently ongoing, stay tuned for a parade of projects that will be commissioning their own commemorative coins! Also, the “Physical Crypto Coin Club” (PC3) in now available and is a complete gamechanger, bringing a lot of new features to the store. Check the website for the massive list of benefits!

Things are looking absolutely great, and I aim to become THE place for crypto projects to get Physical Crypto Coins made!

\That’s all for July, Pirates!